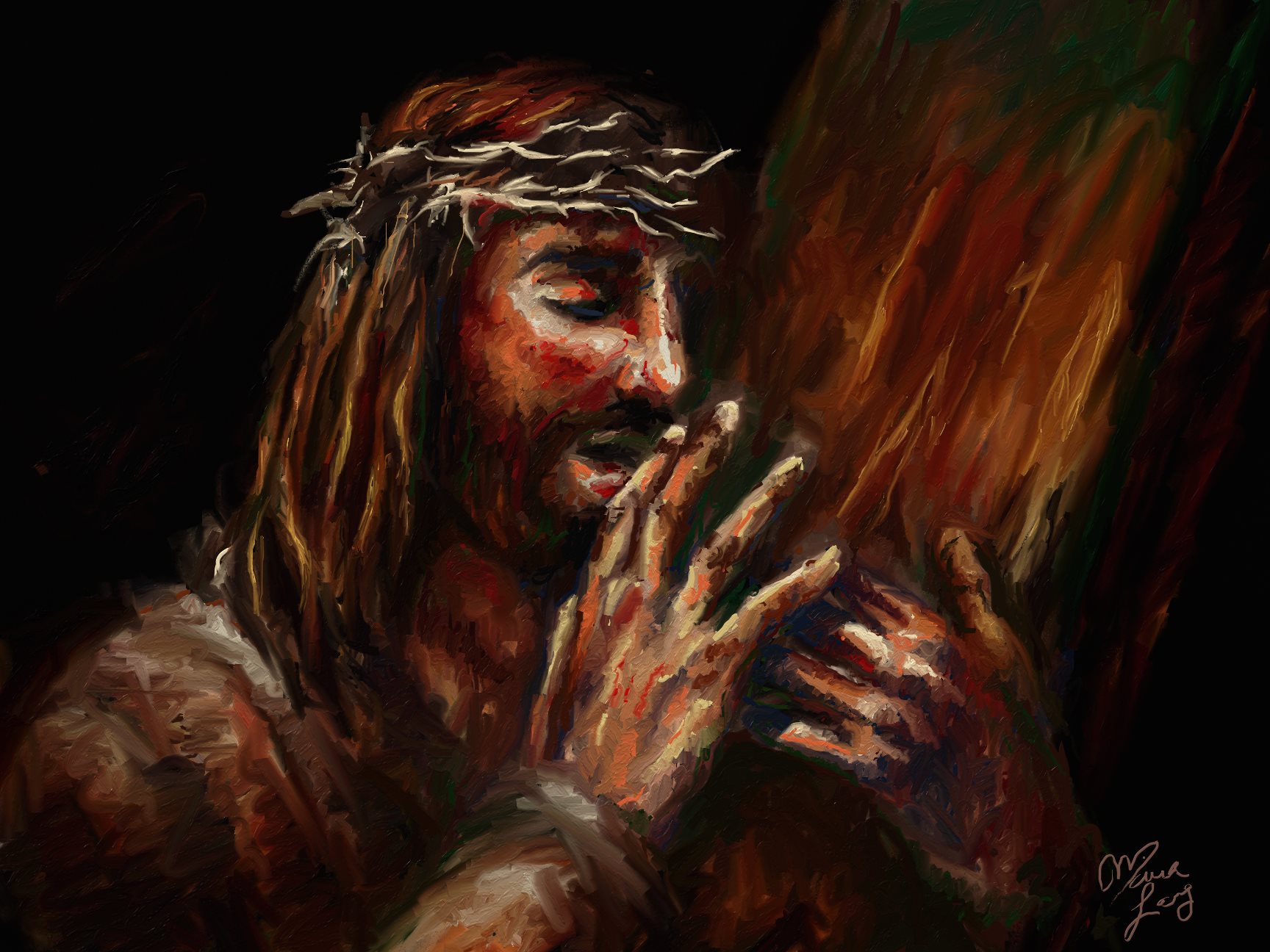 Thanks to the pandemic, Easter was different this year for everyone. And I think it was the best I’ve ever had. Over the Triduum, I did a retreat with my mom from Saint Benedict’s Abbey in Atchison, KS. I’ll link it below–it’s still there and I highly recommend listening to the talks. I want to share my reflections and takeaways because this retreat was a deeply impactful experience for me.

I’ve been in a bit of a rut lately in which it just is so hard to love when I’m not feeling it. I just want the people I should be loving to know I’m in a bad mood, for no good reason. I think the message I got from the retreat is one that will impact any struggle I ever experience, but I took it in through the lens of this struggle so that’s how I’m going to reflect on it.

The theme of living in the moment is key. But not just choosing to live now; I need to embrace now.

Jesus said, “This is how people will know you are my disciples: that you love one another.” And Paul says that if I do any number of good things, if I don’t have love I am nothing but a noisy gong. I’ve heard these things so many times that they usually float right past me without making an impact. But love must be my identity, and that becomes more clear as I embrace being Abba’s daughter. I am the daughter of Love itself. But it can be so hard, and usually only because of emotional messiness inside myself. I am the daughter of love itself and yet I can barely rise to the occasion to love the moment it becomes challenging. So how do I grow? I’ve asked the Holy Spirit to help so many times, and He does help, but I need to enter more into my identity and what I was made for in order for Him to really transform me. I was made to love and be loved. That’s it. In the words of Brother Barnabas, “It’s hard because I make it hard. If I’m gonna love, do it all the way. No more half measures…. Just like a chair is made for sitting on, I am made for loving.”

Jesus shows how to love with no half measures. “God proves his love for us in that while we were still sinners, Christ died for us.” (Romans 5:8) That is tremendous love for a whole world of people who do not deserve it. That is what I must imitate. If Jesus can give His life for me because He loves me while I am still a sinner, I can choose to love people around me whether they deserve it or not. I may be overwhelmed inside by irritation, anger, and resentment, but if I keep that verse and that example of Jesus before me in those hard moments, I can be motivated to love anyway. As Father Meinrad pointed out, Christ can only be found in whatever task is in front of me. In the moments I am having a hard time loving someone, Christ can only be found in loving that person, not in whatever I wish was happening. I can only see Him there. I must live now well, I must love well now, in order to live well with Him.

Hebrews 12:2 says, “Let us keep our eyes fixed on Jesus, who leads us in our faith and brings it to perfection: for the sake of the joy which lay ahead of him, he endured the cross, disregarding the shame of it, and has taken his seat at the right hand of God’s throne.” Loving me was extremely painful to Jesus because it meant all the suffering of the cross. But He had to embrace that cross in order to complete the act. He knew that joy lay on the other side, but in that moment, it was so very, very hard. The only way He could do it was to completely surrender Himself to the Father, let the Father lead Him, let what happened happen, and embrace the task at hand. Embrace whatever loving meant at that moment, which meant the cross, which meant pain. But because He embraced it and didn’t skirt His task, He loved well, and He got through it. And He transformed everything.

And now He’s been there. He knows exactly what it’s like to love when loving hurts the most. Psalm 23 says, “Even though I walk through the valley of the shadow of death, I fear no evil, for you are with me.” When something is hard, when loving is hard, I want nothing more than to avoid it and go completely around the pain and the darkness. But even though it never feels like it in the moment, the worst thing I can do is go around and avoid loving. I have to stick even closer to the shepherd who knows the way out, as Father Simon said. Jesus has been through the valley of the shadow of death in order to love me, and He has come out the other side victorious. He is someone I want to trust to lead me. If I follow His example of loving when it’s hard, and if I cling to Him and keep my eyes fixed on Him while I do, asking Him to do the loving through me, I will succeed, I will come out the other side victorious, and I will be transformed. It may be a source of suffering now, but by loving when it’s hard, my very loving will be transformed into a source of joy. My inability to love, when united to Him while it’s hardest, will be transformed into a great ability to love. Like His love on the cross was the most transformative, when I’m loving through suffering that will be the most transformative to me.

Knowing how to love becomes concrete when I embrace whatever opportunity is right in front of me. Sometimes that opportunity is extremely daunting if only because of how I’m feeling. But God wants to change me in significant ways, and if the challenge to love looks daunting on the outside, then there’s a pretty good chance that this is a way He wants to work in me significantly, and so I can know that it’s absolutely worth the effort. So whatever opportunity to love is right in front of me in that moment, that is the one I must embrace. If now is hard, find God in the hard. If now is glorious, find God in the glorious. As Brother Leven said, in order to know what God wants me to do next I must find Him now, here, and keep walking with Him. Live my current state in life now–both overall and in this specific moment. When it’s time for me to do something, He’ll show me what that is if I stay close to Him and live the life that is put in front of me. But I have to live this life in order to expect Him to show up in it. “To wish for circumstances other than where we are right now is to wish for a world where it’s impossible for God to exist,” said one of the monks, because God can only exist in what does exist.

It takes a lot of surrender to be able to choose the opportunity and moment and reality in front of me. It means giving up what I wish was the reality. It means giving up control and letting God lead, even letting Him lead me through the valley of the shadow of death. But the thing I have to remember is that I would be in hard places without Him. By letting Him lead, I am setting myself up to be on the best path through the hard places. Father Simon spoke of how the greatest adventure is to let someone completely lead me. I don’t know where I’m going, but I get to go places I’ve never imagined. But in order to be taken on that ride, I have to stop organizing where I’m going. One of the monks said, “I don’t know what this road looks like but I know exactly where it’s headed.” It’s the fear of the unknown that I have to surrender. If I surrender that fear and expect life to be an adventure, then I can expect God to do incredible things in my life. I can ponder, “What’s He up to? I can’t wait to find out!” I can see that the hard road and the struggles are the straight path to victory–but only if I embrace the opportunities God gives me that are that path.

What if we viewed the passion and death of Jesus from the perspective of the resurrection, of victory? Father Jay proposed. What if I viewed my struggles from the perspective of victory? Jesus had to suffer and die to be free from His cross and to come out victorious, but it was all about the victory. When I’m having trouble with anything, like loving when it’s hard, it can be about being victorious–if I decide for it to be. Loving when it’s hard leads directly to victory. It’s the only way I can get victory when faced with that opportunity. “Was it not necessary that Christ should suffer these things and enter into his glory?” (Luke 24:26) God doesn’t only bring good out of hardship. He can work in it. That is victory.

Father Jay quoted The Two Towers, Sam talking to Frodo: “We shouldn’t be here at all, if we’d known more about it before we started. But I suppose it’s often that way. The brave things in the old tales and songs, Mr. Frodo: adventures, as I used to call them. I used to think that they were the things the wonderful folk of the stories went out and looked for, because they wanted them, because they were exciting and life was a bit dull, a kind of sport, as you might say. But that’s not the way of it with the tales that really mattered, or the ones that stay in the mind. Folk seem to have been just landed in them, usually–their paths were laid that way, as you put it. But I expect they had lots of chances, like us, of turning back, only they didn’t. And if they had, we shouldn’t know, because they’d have been forgotten. We hear about those as just went on–and not all to a good end, mind you; at least not to what people inside a story and not outside it call a good end. You know, coming home, and finding things all right, though not quite the same–like Mr. Bilbo. But those aren’t always the best tales to hear, though they may be the best tales to be landed in!…Why, to think of it, we’re in the same tale still.”

I am in Jesus’ tale still and He has invited me into a deeper participation in His victory. I must accept the graces of His resurrection victory by saying yes to now.

There is always an opportunity because of the hard things. God is up to something right now. My life will be changed for the better if I’ll only say yes to the reality right now.

If you’re interested in checking out the retreat, click here. You’ll have to scroll a little way to get to the links to the talks.