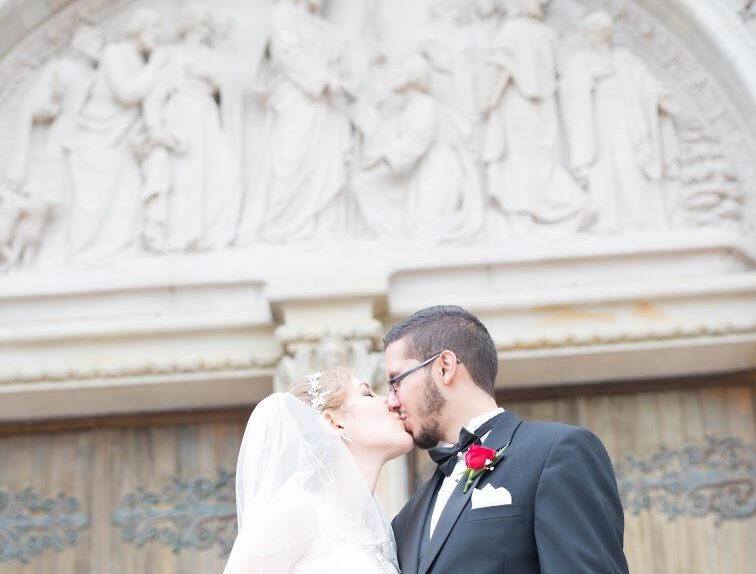 I want to share the story of how my husband Silvio and I met each other, because it shows me so clearly that God works things out at exactly the right moment, and in ways that we never see coming.  You hear those things, but our story is living proof.

Silvio had been going to a college at a different school in a different state.  After his conversion to Christianity, he became very involved in ministry and while he was in college he began to experience a call to the priesthood and the monk life.  He transferred to Saint Vincent College to finish his degree and enter the monastery there.

I liked him INSTANTLY.  I wanted to marry someone just like him.  But I knew he was going to be a monk, so I had no expectations for him specifically.  We became friends quickly and our relationship grew naturally since there were no romantic pressures to cloud us or distract us.

At that time of my life, I was dead set on finding a man.  It was my constant anxiety.  I mean, if you don’t find him in college, what hope is there after that?!?  (This is ridiculous, by the way, but I was driven by the thought.)  I felt like I HAD to find him there, to make sure it happened no matter what.

Graduation came and went.  No man.  I finally realized that I needed to just give the dream to God.  Not that I hadn’t half-heartedly tried, but I was awfully afraid that when I did He’d ask me to be a nun or something, and that was the last thing I wanted.  The funny thing was, as soon as I truly gave Him my dream, I found that I was actually okay with being a nun, and only then was I completely certain in the core of my being that He did not want me to do that.  Surrender is hard, but so worth it.

It was days after this that I ran into Silvio at our friends’ wedding.  We had a slow dance, something sparked big time, and in another week we were officially dating.  He had discerned out of the monastery several months before that.

Side note: lots of people ask me if Silvio’s call to the monastery wasn’t real since he didn’t end up becoming a monk.  I believe it was very real.  Whether you spend a short time discerning and living with the monks, or if you commit your life to the community, you are shaped and formed and your faith is given such a beautiful opportunity to deepen.  There is a huge percentage of men who experience the life for awhile and leave before taking final vows because they realize it’s not for them.  This does not mean they were not supposed to be there at all.  God can use anything in our lives, and He can most certainly do a lot with any length of time spent in a monastery so intentionally dedicated to Him.

I also firmly believe that a huge part of Silvio’s call to Saint Vincent, even though it was through a monastery, was to meet me.  It’s ironic, but when does God ever actually work in a predictable way?

Let God do things His way.  Give Him the things you dream of, the things you’re terrified of.  He does a much better job with them than we ever can.