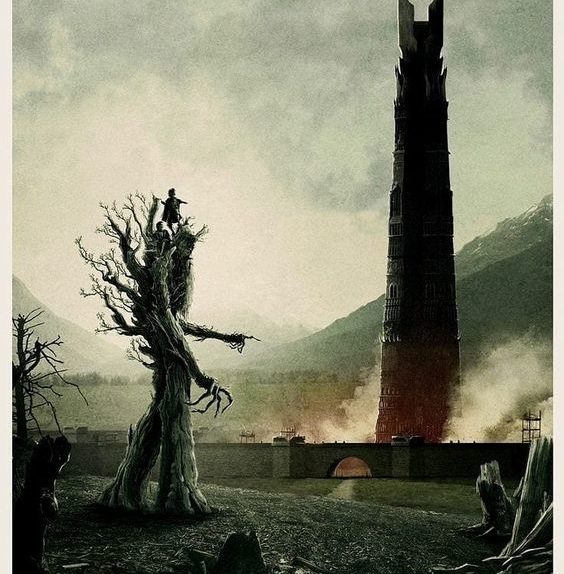 Silvio has been helping me to come to accept my temper and my anger–not to the point that it becomes sinful, of course, but helping me to understand that anger is not automatically sinful, and that this is part of who I am.

Last night he was reading the Lord of the Rings and got to the part about the ents. The ents had been quiet and peaceful for a long, long time. They didn’t like being “roused,” and they even avoided it to the point that they neglected a world that desperately needed their help. And without being roused, without becoming angry, they would never have burst forth to fight for good. They didn’t stew in resentment when they were roused–they charged forth and did something positive. If they had not joined the fight for Middle Earth, Middle Earth would likely have been lost. Lost to others, and even lost to themselves. “‘I will stop it!’ [Treebeard] boomed…. ‘But I spoke hastily. We must not be hasty. I have become too hot. I must cool myself and think, for it is easier to shout stop! than to do it.'”…”‘Of course, it is likely enough, my friends,’ he said slowly, ‘likely enough that we are going to our doom: the last march of the Ents. But if we stayed home and did nothing, doom would find us anyway, sooner or later. That thought has long been growing in our hearts; and that is why we are marching now. It was not a hasty resolve. Aye,’ he sighed, ‘we may help the other peoples before we pass away.'”

The ents finally responded to all the injustice around them because of an anger fueled by justice. They didn’t rashly dash into action; but they didn’t let the anger fester and turn them sour, either. They allowed themselves to feel it at last, and with that they did something.

Earlier, Treebeard had commented, “Some of us are still true Ents, and lively enough in our fashion, but many are growing sleepy, going tree-ish, as you might say.” “Some of my kin look just like trees now, and need something great to rouse them; and they speak only in whispers.” “We Ents do not like being roused.”

The ents who would not be roused lost who they were.

Humans don’t like to be angry. We suppress it, we place great importance on being “nice” so as not to offend anybody, and if we’re Christians, we often think it’s sinful to be angry at all. But anger, like any other emotion, is part of who we are and we can’t ignore it. If we cast away parts of what make us human, we cast away our humanity and cease to be who and what we were intended to be. Jesus felt anger, too, and He used it in the correct settings, driven by His perfect sense of justice, of right–but He controlled it rather than letting it control Him.