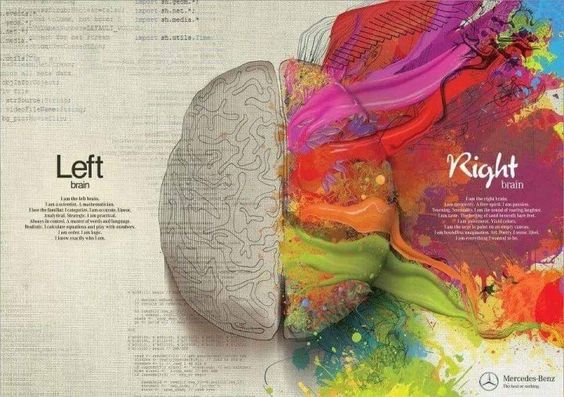 Chances are, you’ve seen the above picture, or one like it. It expresses how the two sides of the human brain are responsible for different kinds of thinking–the left brain for systematic things, the right for the creative.  If you’re like me, you think to yourself, “That’s interesting!”  and move on.  But what if I told you that if you thought about it a little further and decided to stimulate your right hemisphere, your life would be so much more vibrant?  Well, I’m telling you!

So each side of the brain can perceive things, but in completely different ways.  If you read this article, you’ll remember that seeing correctly can be a challenge, and this is why.  It’s because the two sides of your brain perceive differently, but the logical side is stronger than the visual side.  Understand how what you’re seeing can be drowned out by what you know to be there?

The problem is, humans tend to train the left hemisphere much more intentionally than the right.  In schools, most of what is taught is math, words, logic.  Art and music are minimal and sometimes left out altogether.  This is doing more than just leaving out certain subjects and activities.  It is neglecting half the brain!

Imagine if you weren’t taught to read or speak.  You wouldn’t fit into society, but also, your brain development would be seriously impeded!  Your left brain would be weaker because of that.  So…what are we doing when we neglect the other half of the brain?

So this has serious repercussions in our ability to function–and you probably don’t even realize it, because how can we know we’re missing something we never had?  But it also explains why so many people think they can’t draw.  Since the right brain is subdominant, you actually have to switch your brain to a mode in which you are just functioning in the right brain to really be able to use it efficiently.  Otherwise the left brain would overtake your mental processes.  That might sound impossible, but actually it makes sense: you give your brain a task that only the right side can handle.

Even in drawing, we have a tendency to let our left hemispheres take over.  We see a nose, for instance, and the logical parts of us know what a nose looks like and that’s that.  The damage is done.  We assume we know what we need to know to draw it, and we don’t make any effort to look at the nose artistically, to compare curves and shadows to see the shapes rather than the nose.  We let logic, not perception, dictate what we draw.  And as a result, we don’t end up with what’s actually there.  Because our assumptions about what’s there are almost always different than the reality.

Most things that we do in life require both sides of the brain, but since the left side is dominant, our performance can be more driven by that.  Drawing is one of the only skills which require only one side of the brain, and that’s the right side.  That means that it is extremely valuable in training a huge part of your brain that so often goes unfed.

Don’t get me wrong.  Input from the left brain can still be helpful in drawing well.  But to be truly skilled in art, we need to know how to ignore those ideas too, because those preconceived notions about how things should look can be so deceptive.  So when learning to draw, it’s important to be taught to see, and how to analyze it in the context of seeing.