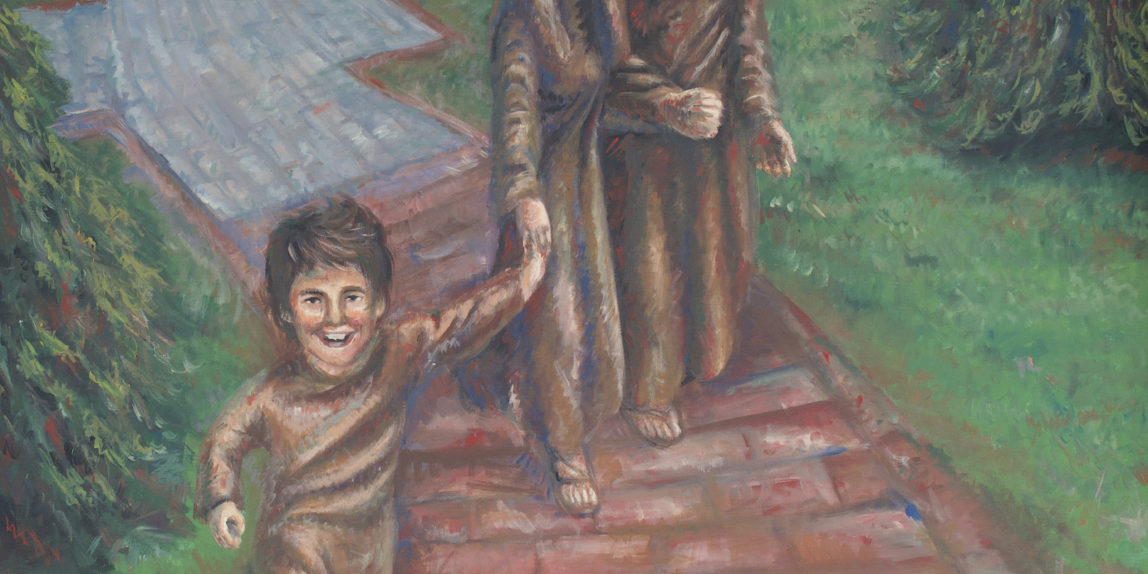 This was one of the most special commissions I’ve ever had. When I paint something, it’s very often something that was inspired in my prayer. What’s really neat is that a lot of people who ask me to paint something for them request an idea that is exactly what would have popped into my mind. The Holy Spirit is consistent in His inspirations no matter where they come from.

This painting was commissioned for a really special place called the Cross on the Hill. The cross is life-sized and overlooks the most stunning view of the mountains, and the peace there is on a level that I have experienced literally nowhere else despite my love of getting in the midst of nature everywhere. The presence of God there is tangible in a deeply, extra-special way. There is a prayer walkway that leads to the cross. It is that walkway which is worked into this painting.

I was asked to paint a scene in which Jesus is on a walk with His parents. They’re enjoying life together when suddenly Jesus breaks into a run, Mary just barely managing to keep hold of the tips of His fingers. They are laughing. Jesus is running because He is eager to get to His cross, His vocation–as eager as a little kid to get to the playground.

Not only does this moment speak of who Jesus is and how willingly He gives Himself for us, even sacrificing the intense love of family and deeper intimacy with His heavenly Father for it, but it speaks of a certain nobility for us to follow too. Life is hard, filled with suffering and trials. But there is a distinct joy that comes from following the path that God has laid for us, the tasks He asks of us. He asks us to take up our cross, but it’s not just for pain. It is for nobility and glory and an imprint on the world that He has in mind specifically for each of us. Jesus was afraid of His cross, too–the agony in the garden makes that clear. But He followed His Father’s lead anyway and He saved the world in the process. As Christians, we are called to be little Christs. Not in a pious, distant-from-the-world kind of way. We are called to follow Jesus in all His examples, as He lived in the world with people and ultimately sacrificed everything–but He did it all willingly, even eagerly.

In this painting, Jesus is still surrounded by love as He dashes to His cross. He invites us in too. Let’s dash to the cross on His heels. The Cross on the Hill up in Benezette, PA is the most peaceful place–because even though Jesus’ moment of sacrifice was anything but peaceful, it enabled peace to reign, a peace that isn’t flimsy but which sinks deep into the soul to live and stay. If we embrace our crosses and vocations as eagerly and lovingly as Jesus embraced His, we’ll have that kind of peace even in the midst of the hard parts because He’ll be so intimate with us. And imagine the peace that follows the cross.

The story of the cross is not about death and suffering. That was not the end. The entire point of the cross was to bring about redemption and a rising again that was infinitely more glorious than the life that led up to it. Dashing to our crosses and embracing them is not meant to bring suffering. Suffering will be a part of it, but it is part of the process, not the goal. The goal is more attractive than anything we can imagine. If we dash to our crosses with Jesus, if we embrace them and embrace whatever life is set before us, He will take it all and transform it into all that peace and glory and intimacy with Him that is the whole point.

Jesus isn’t dashing to His cross for the sake of the cross alone. He is dashing to it because of what He can bring out of it. And when I picture this scene taking place at the Cross on the Hill, it’s all very understandable. Because there, the cross we can touch and see is already a sign of victory. It stands in peace and beauty which is a clear glimpse into all He wants for us.