Thomas Moran was born on February 12, 1837 in England but was considered to be an American artist.  He is best known for his majestic landscapes, and he focused particularly on scenes in the Rocky Mountains.  He was hired as an illustrator for Scribner’s Monthly, eventually becoming their chief illustrator.  From there he became well known for his paintings of the American West.  He traveled for many years for the sake of his art, spending much time in Yellowstone specifically.

Most striking about Moran’s work is not just the land itself, but the way in which he lifts the colors to the eyes of the viewers, lays clouds on the scene, shines brilliant light on the countryside.  His works are vibrantly captivating. 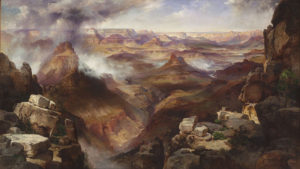 and Sunset at Sea. 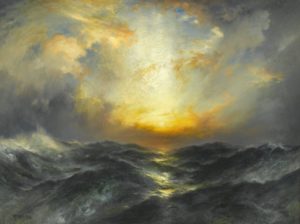