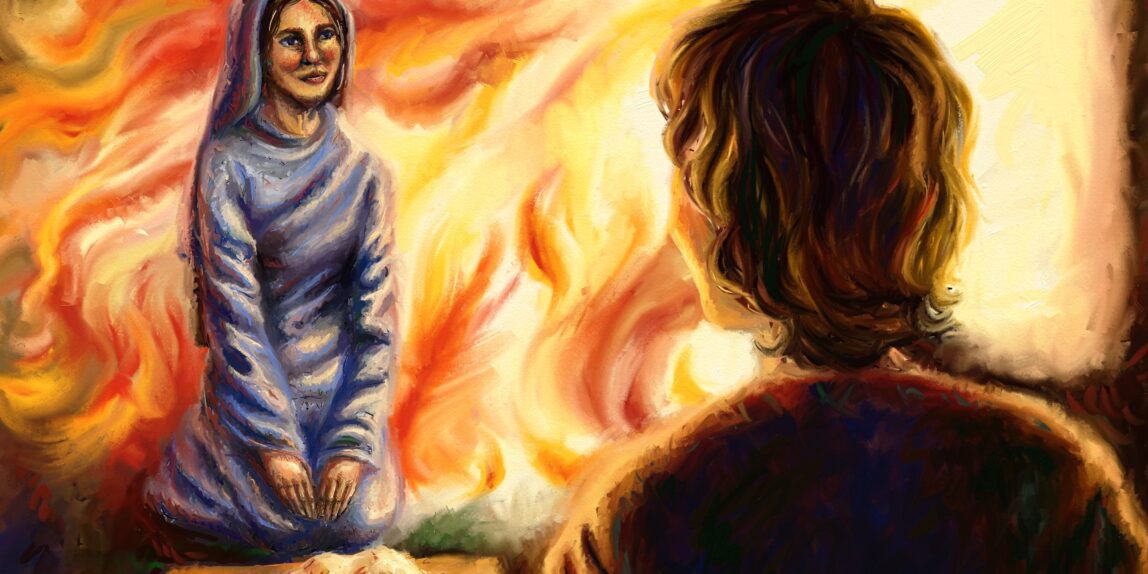 “In the sixth month the angel Gabriel was sent by God to a town in Galilee called Nazareth, to a virgin betrothed to a man named Joseph, of the House of David; and the virgin’s name was Mary.  He went in and said to her, ‘Rejoice, so highly favored! The Lord is with you.’  She was deeply disturbed by these words and asked herself what this greeting could mean, but the angel said to her, ‘Mary, do not be afraid; you have won God’s favor.  Listen!  You are to conceive and bear a son, and you must name him Jesus.  He will be great and will be called Son of the Most High.  The Lord God will give him the throne of his ancestor David; he will rule over the House of Jacob forever and his reign will have no end.’  Mary said to the angel, ‘But how can this come about, since I am a virgin?’  ‘The Holy Spirit will come upon you,’ the angel answered, ‘and the power of the Most High will cover you with its shadow.  And so the child will be holy and will be called Son of God.  Know this too: your kinswoman Elizabeth has, in her old age, herself conceived a son, and she whom people called barren is now in her sixth month, for nothing is impossible to God.’  ‘I am the handmaid of the Lord,’ said Mary.  ‘Let what you have said be done to me.’  And the angel left her.”

The Holy Spirit will come upon you.

I’ve seen a lot of paintings of the angel Gabriel coming to Mary to announce the conception of Jesus and his great destiny.  But what I’ve not seen (to my memory) is the part that strikes me most: The Holy Spirit will come upon you and the power of the Most High will cover you with its shadow.  Have you ever stopped to think of what that must have been like?  Or of the courage it would have taken to live out the task set before Mary by Gabriel?  But he told her not to be afraid.  I am convinced that God filled her with so much grace to be able to endure all the hardship that was to come: being thought to have cheated on Joseph, to have to flee with her son at the start of his life because that life was threatened, to be set apart from all society because of the divinity in her family, to know that much grief and suffering was coming.  She must have been filled with so much courage.  The Holy Spirit filled her as he conceived Jesus in her.  But when the Holy Spirit fills people, he also fills them with strength and courage to be able to rise to the challenges to which he calls them.  When the Holy Spirit fills people, they are empowered with an intensity of life that is clearly beyond their humanity.  We don’t often speak of Mary having had that experience, but she did.  Imagine her having that passion and strength for all those years until one day when the Holy Spirit descended upon the apostles at Pentecost, she was there with them and rejoiced that they too could experience God living in them in this marvelous way.  She had that all along.

I think that in many ways, Mary’s life must have been more characterized by sorrow and struggles than just about anyone else because of how close Jesus was to her heart and how much she had to watch him go through.  But the Holy Spirit in her helped her to not just endure, but to live and love wildly in that life.