Leonardo da Vinci was born on April 15, 1452 in Vinci, Italy.  (At that time, it was Vinci, the Republic of Florence.)  He was one of the greatest artists of the Italian High Renaissance, and his skills included painting, sculpting, inventing, architecture, math, science, music, anatomy, literature, engineering, geology, botany, astronomy, history, writing, and cartography.  *Whew!*  He is probably best known for his painting, but his other interests come through in his art, particularly in his sketches.  He is actually said to have invented the parachute and the helicopter.

Leonardo’s most famous paintings are easily The Mona Lisa and The Last Supper, and some of his drawings have endured through time as well.  The genius of his Vitruvian Man (shown below) continues to be used as a means for understanding the human body, particularly for artists.  For such an accomplished artist, very few of Leonardo’s paintings have survived–only about fifteen, a result of his not being pleased with the final products of his work (or so ’tis said).

Below are shown several of Leonardo’s paintings, The Annunciation,  Virgin of the Rocks, 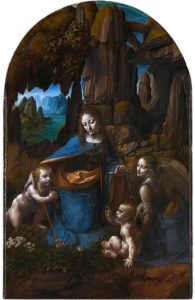 The Mona Lisa,  The Virgin and Child with Saint Anne, 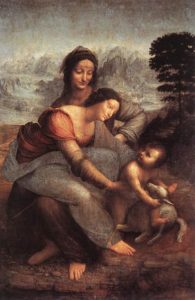 and some of his drawings, Study of Horses,  a study of the unborn child, 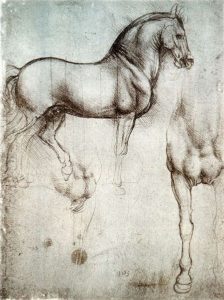 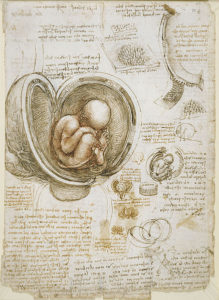 and The Vitruvian Man. 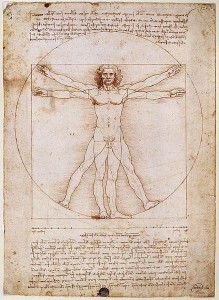