Howard Pyle was born on March 5, 1853 in Wilmington, Delaware.  He was an author and illustrator, and naturally illustrated many of his own books.  If you ever get an itch for reading about knights smiting each other great buffets, Howard Pyle is your man.

Pyle started his own art school, but he is best recognized for his literary works.  He is loved for his The Merry Adventures of Robin Hood, several volumes chronicling the stories of King Arthur and his knights of the Round Table, and Otto of the Silver Hand, among others.  He illustrated these as well as several American history texts.

Pyle also greatly influenced how most of us envision pirates today.  Accurate imagery of pirates has not been passed down from the days we think of when we think of pirates, so Pyle got creative with his illustrations and incorporated ideas from the dress of gypsies.  These ideas have been widely adopted and are seen even in such well-known settings as Pirates of the Caribbean.

Pyle has influenced countless artists, and Vincent van Gogh actually wrote to his brother that the illustrator “struck me dumb with admiration.”^1  Pyle has established himself with such influence that he is known not so much for specific works, but for the greatness he passed on to the world.

Below are shown Thus the Princess Cometh Forth from the Castle at Twelve O’Clock at Night,  Two Lovers in a Garden, 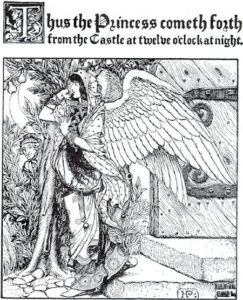 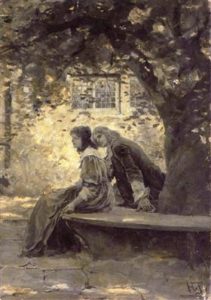 two illustrations from The Merry Adventures of Robin Hood, 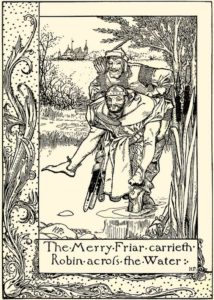 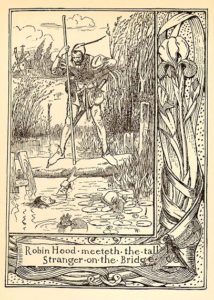 and several illustrations from Otto of the Silver Hand. 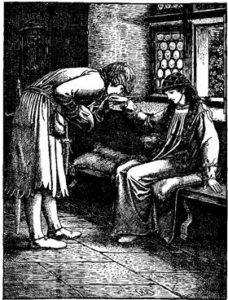 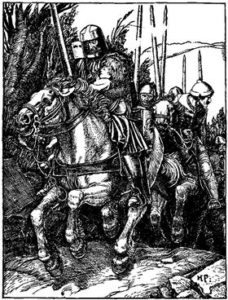