Michelangelo is perhaps the most famous, awe-inspiring, and influential artist of all time.  Born on March 6, 1475, he was an Italian painter, sculptor, architect, and poet.  He was a gift to the world during the glorious years of the High Renaissance.  He produced extensive works, and each was of the finest quality and displayed unparalleled talent.

Michelangelo’s sculptures are an example of his understanding of the finer details of the human body.  He payed such attention to detail, perfectly crafting each muscle, each movement of the arm or leg.  The folds in the fabric of his creations’ clothing are so real you almost can’t believe they aren’t actually cloth.  And more astounding still, his most famous sculptures (The David and the Pieta) were completed before he was thirty years old.

He is well known, too, for his paintings.  He painted the entire ceiling of the Sistine Chapel, as well as the Last Judgment scene on the altar wall.  The ceiling alone took four years, but when you consider the work that goes into a single painting, this is a surprisingly short amount of time for such a project.  He spent those years on scaffolding, lying on his back in the dim candlelight available to him, masterfully crafting the scenes which have lived on over the centuries and inspired so many.  He painted more than 300 figures on the ceiling, a 500 meter space.  It chronicles the Book of Genesis, from the creation to the story of Noah.  Most widely recognized among these scenes is the Creation of Adam, shown above.  Painted as though supporting the ceiling are twelve figures who prophesied Jesus’ coming.

Michelangelo has inspired artists in every century since he lived, including such noteworthy artists as Raphael.

Of his sculpture Michelangelo famously said, “I saw the angel in the marble and carved until I set him free.”

Below are shown The Pieta,  The Last Judgment, 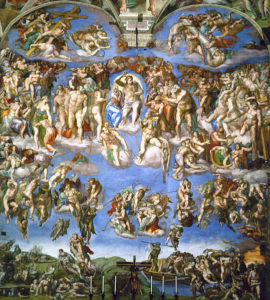 David, The Crucifixion of Saint Peter, 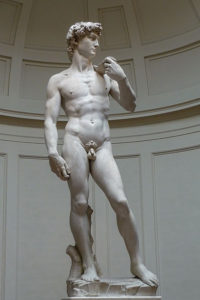 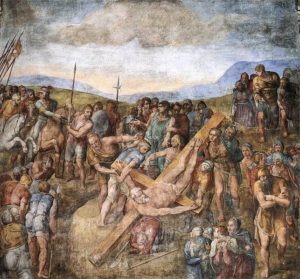 Ignudo (from the Sistine Chapel ceiling), 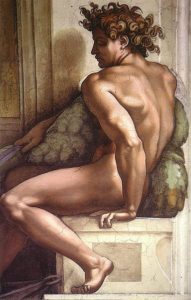 and the whole ceiling of the Sistine Chapel.