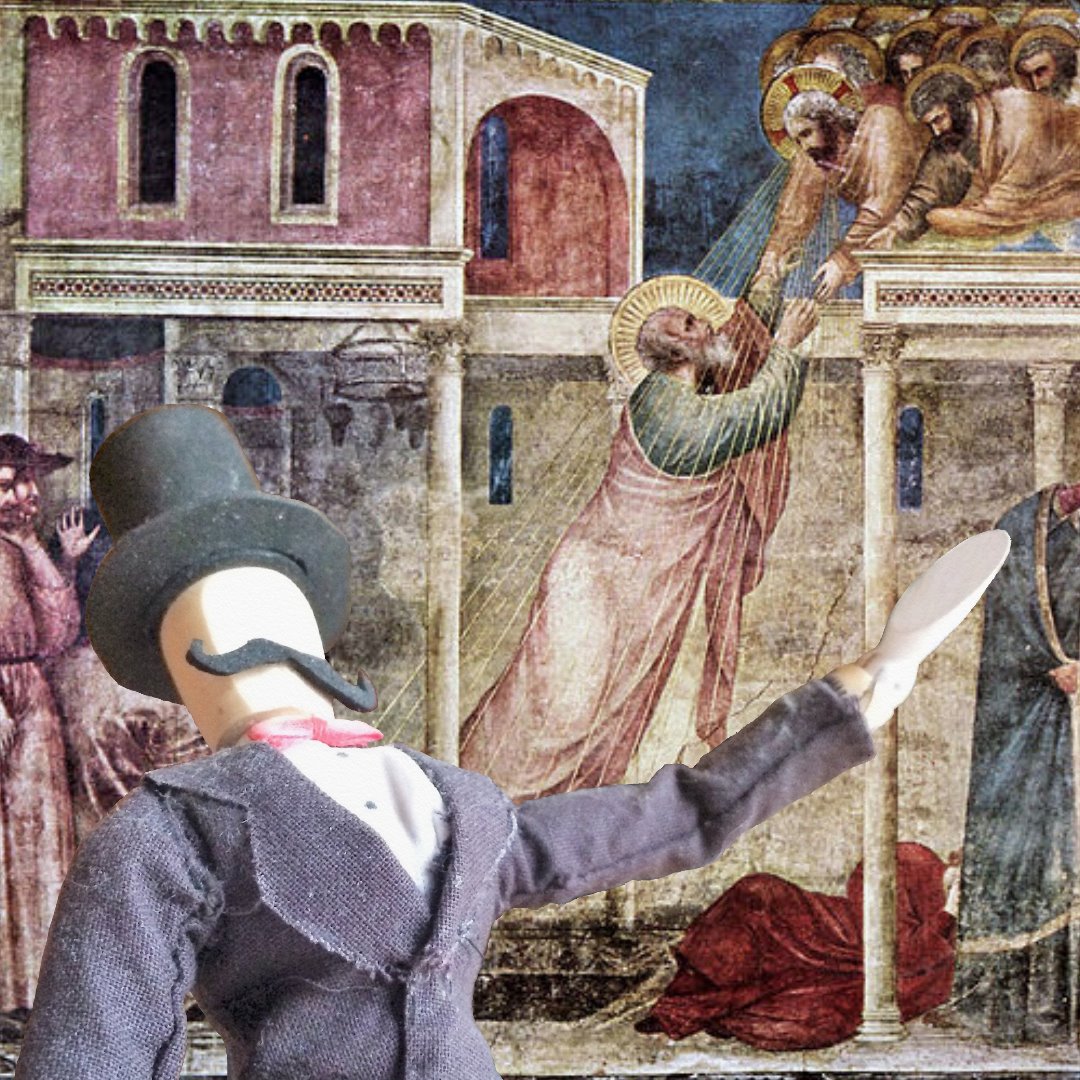 Even if you don’t know anything about art history, chances are you’ve at least heard the name Renaissance.  That’s because it’s one of the most pivotal times in all history, bringing forth some of the greatest artists (and other people of consequence) of all time.

Today Sylvester is going to tell us about Giotto, a fresco artist who is one of the first to take such big steps in a new direction after medieval art.  Now, Sylvester takes his own reputation very seriously and is urgently insisting that we clear one thing up right away, lest you go away from an interaction with him with anything less than exactly the right information.  Giotto is pronounced Jotto.  He’s Italian, so the I after the G makes the G soft.  Okay, now that you can speak Italian we can move on to the art.

The Renaissance’s birth is hard to pinpoint since artists everywhere didn’t exactly hold a conference to decide that they were going to suddenly change all their styles on a given date.  But a transition did occur slowly beginning around the 1300’s.  This change was not only in artistic style, but driven by the people’s altered thoughts about the world, people, and God.  The term “renaissance” means rebirth.  During this time, an interest in the Greek and Roman came to life again, influencing the style of the time’s art.  Sculptures in particular were reminiscent of Greek and Roman statues.  Perspective was adopted as a means of achieving a sense of reality in paintings, creating a window into the scene through which the viewer could enter and feel a part of the moment.  That moment often was deeply rooted in faith.

Giotto was a leading figure in the Italian Renaissance, living from 1266-1337.  His works were entirely of people, portraying such passion of emotion as to bring his scenes truly alive.  His technique was fresco painting, which involved adding pigment to wet plaster which would then dry with its surface.  Such art is usually done on walls, rather than a free canvas which can be taken down and moved anywhere.  Frescoes were popular decoration for churches.

The Ascension of Saint John the Evangelist is in the Peruzzi Chapel in Florence.  It is an example of Giotto’s focus on human emotion and depiction of the glories of the supernatural.  Note the various expressions of awe on the faces of those on earth, the postures of reverence, the individuality of each character.  And yet he used symbols such as halos and rays of light to emphasize the holiness present.  And though the buildings are merely background to the scene, it is clear that Giotto was intentional about their placement, using perspective to draw the eye in toward to important action in the scene.  The architecture itself, with the pillars and rounded windows, exemplify the style of the Renaissance which hearkens back to Greek and Roman architecture.  His art laid the foundation for creating images which could help mortal eyes to make a connection between the physical and the transcendent, to grasp the glory but also reality of God.

Giotto was an inspiration to Michelangelo, who became one of the Renaissance’s most spellbinding artists but who would not enter the scene for 200 more years. 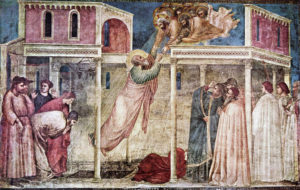